ABOUT Hav A Sole

Since 2014 we have given over 25,000 pairs of shoes
in 27 cities while touching thousands of lives

Hav A Sole has touched thousands of lives through, social activism, volunteering and building community.

Our movement not only affects the individual who receives the shoes but it increases a sense of social responsibility with its young volunteers offering them a way to get involved in their community. Built upon a grassroots model, Hav A Sole’s goal for 2019 is to double our efforts so we can increase the amount of shoes given out and touch even more lives. While we receive support from friends from all over the nation, we are especially grateful for the support of ten local Nike outlets who have donated thousands of  shoes so the Hav A Sole team could deliver them to homeless individuals and at risk youth. The health of the feet is paramount in allowing homeless to get through their day while living on the streets. In January of 2012, the Journal of American Podiatric Medical Association stated that a rate of 3 out of 15 homeless people, after being assessed, had to be referred for foot problems, such as infections, painful corns and calluses. It was concluded that a good portion of these individuals who required medical care, was due to not having access to proper footwear.

The population we serve are at risk youth and the homeless. It is important to remind people that circumstance does not forfeit your humanity. It is our goal to restore confidence through impact. We give our recipients the power to choose for themselves again. Through our partners and their generous donations, we bring a retail experience offering choice of quality footwear to those in need. We have delivered shoes to Safe Place For Youth (SPY), The Clare Foundation, Boys and Girls Club, Covenant House, The Union Rescue Mission, Midnight Mission, Santa Monica PAL and others.

Our non-profit helps by:

Hav A Sole, 501c3 Registered Non-Profit

Hav A Sole’s mission is to provide the homeless and at risk youth population with quality footwear to encourage healthier lifestyles and prevent disease, while fostering a sense of community along the way.

Hav A Sole Board of Directors

Meet the Hav A Sole Team

As Founder, Rikki has been the driving force behind Hav A Sole and has been involved in every aspect of its development. He is responsible for product collection, domestic distribution, national travel, organizing events and developing strategic partnerships within the community.

As a young boy, Rikki, spent over five years in a shelter so he knows what’s it feels like to go without. His mother, who was struggling to make ends meet, couldn’t afford to buy him a pair of much needed shoes. One day, a former resident spoke at the shelter and afterwards, offered to buy him two pairs of new Vans. Rikki never forgot that women’s kindness or the confidence that came from having a fresh pair of sneakers to where to school. However, due to his early deprivation, Rikki later started collecting sneakers in every style, color and brand imaginable. His sneaker obsession continued until his early thirties, when he was a fashion photographer and found his life felt meaningless to him.

One night Rikki, realizing he had more shoes than he needed decided to give some of his collection away.  The next day he loaded up the back of his car with shoes and drove the streets of Los Angeles, until he found someone who could benefit from a quality pair of shoes. Afterward, he asked the recipient if he could take a before and after photograph which he posted on social media. Friends all over the country were inspired and offered to send their extra shoes to him as well. Thus, Hav A Sole was born and in ten years we have given out over ten thousand pairs of shoes to shelters, at-risk youth and to those in need.

If you were to ask Rikki today what he has learned from Hav A Sole, he will tell you, “I get more from giving a pair of shoes than I ever did from owning hundreds.”

Steve Simon, is the founder of Simon Equity Partners, LLC and has been a managing member since January 2007.  From February 1997 to December 2006, Mr. Simon served as president and chief executive officer of Melvin Simon & Associates, Inc., a privately-held real estate and investment company.  Mr. Simon serves on the board of directors of the Pacers Basketball Corporation, Yes To, Inc. and Coalision, Inc.  Mr. Simon is a director for the Herbert Simon Family Foundation and serves on the boards of the following non-profit organizations; Conscious Alliance and HeadCount.

Steve Simon has played a key role in strategically guiding the Hav A Sole mission since its inception in 2014.

Wendy is a Clinical Marketing Manager for Polaris Teen Center, a facility that provides treatment for adolescents dealing with mental health issues. Wendy brings years of experience to Hav A Sole where she continues to be instrumental in helping guide her son’s vision by implementing marketing strategies, executing outreach and building relationships within the community. Wendy is also a gifted author with numerous articles in the Huffington Post as well  her own recent memoir, Mother Load and uses her writing skills to share Hav A Sole’ s message with the public. Edward is co-founder of PCF Restaurant Management, and owner of Buffalo Wild Wings Grill & Bar in Los Angeles. Edward and his business partner, Karim Webb, were named 2014 California Small Business of the Year, after creating a successful model for opening inner-city restaurants. Their Baldwin Hills location—1 of 3 they own—has had the highest year-over-year growth of any Buffalo Wild Wings location in the country and is still growing. Many businesses shy away from moving into inner-city areas like South Central Los Angeles due to concerns about market viability, vandalism and gangs, but when Ed and Karim were looking for a location for their Buffalo Wild Wings Grill & Bar franchise, they realized it didn’t make sense to look anywhere else. Camille Boothe is passionate about people, so it comes as no surprise she works in a career where she helps organizations attract, retain, develop and support the potential of their people!

With over 20 years of HR/People experience supporting Brands like IMAX, Ralph Lauren, Lululemon and more recently as Head of People and Culture at Uninterrupted, Camille has found not only a new home in Los Angeles but also a new purpose in being of service to her community through charitable giving and worthy causes like the Hav A Sole organization. Originally from Jamaica and very humble beginnings, Camille understands the difference a new pair of shoes, socks or even just a conversation can make in a homeless person’s life, as they deal with the many challenges each day can bring. Cathi began her career as a producer of television commercials in Texas, her home state. She moved to Los Angeles in 1987 and worked for 3 years as staff production manager at PYTKA and fell in love with casting. Cathi Carlton Casting was founded in 1989. During its first 5 years in operation, the casting centered around Cathi’s two great loves – Sports and Real People. CCC has since expanded into a variety of genres, including Comedy, Beauty, and Celebrity – all the while exploring new talent. With a long list of major national campaigns to its credit, CCC leads the commercial casting industry with its keen vision for emerging trends and commitment to the highest standards of professionalism. 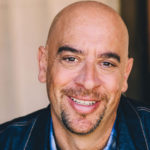 Michael has worked in television commercial casting and production for the past 15 years. Previously Michael was the Program Manager and a classroom teacher for Dramatic Results, an arts-based educational non-profit program for elementary school students in the Long Beach Unified School District. Michael started donating shoes to Hav A Sole years ago and was drawn to the organization because of the profound simplicity of the mission and the way in which the personal connection of the program makes an immediate and tangible difference in the lives     of everyone involved. Michael lives in West L.A. with his wife Theo and two children Noah (17) and Bianca (13). Alana is the Senior Development Officer at Covenant House California, where she supports fundraising efforts including managing an Advisory Board, the Sleep Out movement and all fundraising events. She has served on the team and been an LA since 2017. Prior to her time here, she worked on the Development team at Covenant House International in New York, supporting fundraising for all Covenant House sites nationally. She first got introduced to Covenant House as a Board member while working a job in financial services. After 2 years as a board member, she felt great conviction to quit her job in finance and dedicate her life to serving at-risk, homeless youth. She attended Saint Mary’s College in California and got a degree in Social Justice. She is from the Bay Area, where her family still resides and in her free time she is a part time yoga teacher, host of the Give A Damn podcast, and wellness fanatic. LA native born and raised but hails from Puerto Rican descent. His love for the city is in his veins and in true fashion loves the Dodgers and Lakers to name a few. The players he holds near and dear to his heart are Jackie Robinson for breaking the color barrier to play baseball and Kobe Bryant’s Mamba Mentality mindset to “Just Be Better”. Nohan has carried the same passion and commitment for sports into his commitment to his community by building investing in our urban youth and being a team player to see others grow and win. Aside from serving his community, his true calling is living life with his amazing boys and beautiful wife. Family is where love, joy and support truly is important in order to share that to others around the world. JENNELL MAZE is a Licensed Clinical Social Worker and received her MSW at the University of Southern California. Her professional career has granted her the opportunity to be involved in promoting mental health as it relates to individuals, families and communities. She has provided 15 years of comprehensive outpatient services to children and their families. She is trained and certified in Trauma-Focused Cognitive Behavioral Therapy and Dialectical Behavioral Therapy. Her experience has allowed her to interface with various dynamic settings such Pointe Malibu Substance Abuse Residential Facility and serve for nearly ten years as an Adjunct Assistant Professor at University of Southern California Suzanne Dworak-Peck School of Social Work in the Department of Children, Youth, and Families teaching courses in human behavior and the social environment. Jennell is most proud of her role as a Mother to her 7 year old daughter. Her village of support drives her passion to uplift her daughter, self, and others toward a collective culture that strengthens our wellbeing. Ryan grew up in the Bay Area and basketball was his life through college. After two years a knee injury and honestly his lack of height and depressingly slow first step put him on a different path and he moved to LA after graduation. Ryan was introduced to Hav A Sole while working as a casting associate for Cathi Carlton Casting. His love for basketball brought with it a love for shoes and being able to be part of the Hav A Sole team and provide shoes for those in need is an opportunity he is grateful to have. Ryan lives in Santa Monica with his wife Tiffany and son Maddox. He now runs Lagod Casting, a commercial casting company.